OK, you might not have a clue what I'm on about here but bear with me.  The Hofmeister Kink is a small design feature that's appeared on every production BMW since 1961.

Look, here it is.  In the circle, a small, forward angled cut-out at the base of the C-pillar. 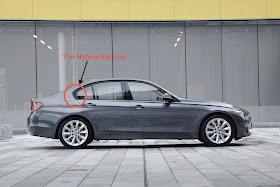 It's named after Wilhelm Hofmeister, then BMW's director of design, and is meant to suggest that BMWs are rear wheel drive.

So why has it been dropped?  Because BMW are bringing out a front wheel drive car - the i3 - which, as well as having no Hofmeister Kink, sports a floating roof.  Basically they've avoided the subject of not having to put the Hofmeister Kink in by having no C-pillar at all.

Here's the i3, as captured by www.germancarforum.com 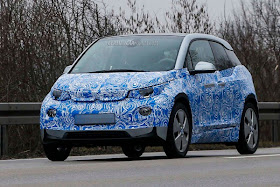