Colin Hubbard reviews the Mercedes-Benz A250 'Engineered by AMG'

I think it’s fair to say that everyone loves hot hatches, the idea of an affordable car that delivers front wheel drive thrills whilst also being capable of taking the kids to school in comfort, or that washing machine to the tip. Volkswagen originally invented the concept in 1976 with their Golf GTI, and it's taken Mercedes some 36 years to realise that VW may well have been onto something.

The A250 ‘Engineered by AMG’ is Mercedes first proper stab at the hot hatch market, albeit a slightly upmarket variant only available with 5 doors and automatic transmission - which restricts sales from those who want something, well something, with 3 doors and a manual gearbox. This model is a teaser until the proper AMG A45 A-class is unleashed in 2013 with four wheel drive and a rumoured 350 bhp.

The base vehicle is a fairly good looking car, and because it has been designed as a 5 door only is well proportioned and not particularly offensive, but it does look slightly akin to a Toyota Auris at the rear side window level. At the front is Mercedes' corporate nose, taken from the sportier models and a front bumper with 3 large mesh grills giving a slightly menacing look. At the side an arcing crease provides a little visual drama and breaks up the Toyota looks a little. At the rear Mercedes have put a lot of effort in with dual, oval exhausts, vents in the rear bumper along with a spoiler integrated into the rear hatch which overhangs the rear screen. 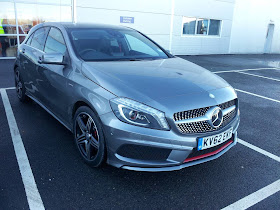 Visually the only problem for me is the side view, not helped by the trend for shorter side windows which in turn means theres more bodywork exposed, and the crease doesn’t really help. Some more drama lower down such as on the Audi RS3 and the removal of the crease would help with the looks, maybe they should have hired Ian Callum for the afternoon to get it spot on. From the images of the future AMG A45 the side view hasn’t been improved - which is a shame.

The interior is well put together and a cut above Fords and Renaults, being absolutely Germanic in quality. The dashboard is well laid out but the Media screen (which, incidentally looks like a tablet),  located high up on the dashboard, looks like a last minute affair. Rear vision is terrible due to a combination of large C pillars and high rear seats and the optional reversing camera option may be worthwhile for urban driving and squeezing into tight parking spaces.

Interior space is snug rather than roomy but theres sufficient space in the front and rear sculptured and generously side bolstered seats with integrated and fixed headrests. This car seems to be built and aimed towards housewives, and those high rear side windows and tall front seats, with integrated headrests, make the view from the back seats claustrophobic and travel sick inducing, especially for kids sitting at a lower level. The front seats are very comfortable with the look not out of place in a racing car and hold the driver and passenger well during enthusiastic cornering. Overall the inside is a nice place to be if a little compact.

The engine is a lively unit.  It's a 2.0 turbo with 208bhp and 258 lb/ft torque but it is only available as a 7 speed auto and whilst, on paper, the figures deliver a 0 to 62mph time of 6.6 seconds and a top speed of 149mph the performance doesn’t feel this rapid. The engine note is tinny, if not clinical, and the automatic transmission dulls performance.  I found that when exiting a roundabout the car would pick up, spin the front wheels then the traction control would cut in and a battle of power and traction would commence until the desired speed was reached. This car would seriously benefit from a mechanical limited slip differential as the electronics alone can’t cope with this amount of power through the front wheels only. Overtakes are completed comfortably as the flaws of front wheel drive don’t rear their ugly head so much at higher speeds. 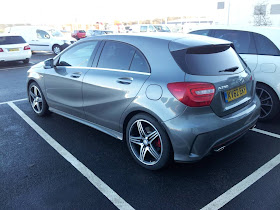 Cornering is safe and secure and perfectly suited for a small family car, without the harshness of the equivalent Audi even on the standard size 18 inch AMG alloy wheels. Steering feel from the electric rack is positive and offers defined feedback from the front end even if the front wheels are spinning when cornering. The brakes are up to the job with a positive feel and no brake fade was experienced despite some fairly heavy usage.

The list price for the car is £28,775 and the price as tested was a whopping £42,000 which is into Audi RS3 territory and a different league altogether. The car is fairly well spec’d as standard and personally I would take the standard car as it comes but with heated leather seats for an additional £1000.

There are few rivals to this car, due to the fact it's a 5 door and automatic only, so the current Renaultsports, Focus ST and Astra VXRs are ruled out as none can offer both auto option and 5 doors for the sporting models. The only true alternatives are the German rivals of Audi A3 1.8 turbo, Golf GTI and BMW 125i. The Audi doesn’t match the performance of the A250 being down on power but the Golf is up there and just slightly slower but having a much greater chassis will ultimately be a more enjoyable drive and faster cross country car. The BMW would lose out due to stodgy looks of the 5 door 1 series which is a shame as it has a fantastic engine, chassis and price.

The A250 is a fairly niche car in that it has limited its market by making it without the option of 3 doors or a manual transmission.  Both items may have helped - a 3 door may make this a better car in the styling department, and manual transmission offering more control of the engine. This isn’t a true hot hatch but a warm hatch suited to those who want a compact Mercedes for its prestige and heritage.  More style over substance. AMG haven’t fully put their name to this car and with good reason, instead they have helped tweak the base car into something warmish.

My personal preference would be the Golf GTI over the A250 but I’m confident it will still be a good seller. The future (full) AMG A Class 350 should be a true hot hatch and bring the fight to the forthcoming Audi RS3 and Golf R with its proposed 350 BHP 2 litre turbocharged engine being put to the road via a Haldex based four wheel drive system. We’re looking forward to that battle! 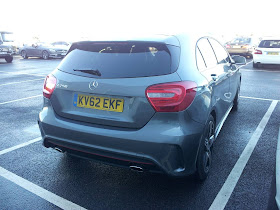 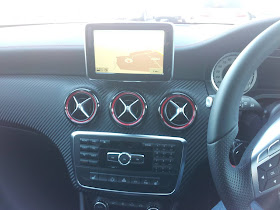 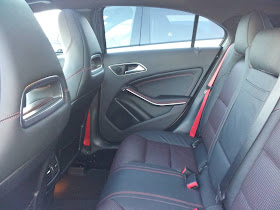